After spending as much time as I have with Sumeet and Amarinder, I feel I can call them friends. We hung around New Years for their engagement/party and then three more days for their wedding weekend.

The love between a bride and a groom doesn’t need to be in English or to observe Christian beliefs for it to be apparent and life changing. One of my favorite things about being a photographer is capturing the sort of emotions that transcend any sort of cultural barrier. Sumeet and Amarinder both follow Sikhism so it was a special honor that they would ask me to document something a little different for me (read: my first non-Western wedding). As I said, their wedding lasted over 3 days. To be more cohesive, I think you need to see it all together.

So stick with me! I’ll explain the photos and traditions as I go (Wikipedia and other sources will be used heavily :)). This is a LONG POST because it covers 3 days. Lets dive in. 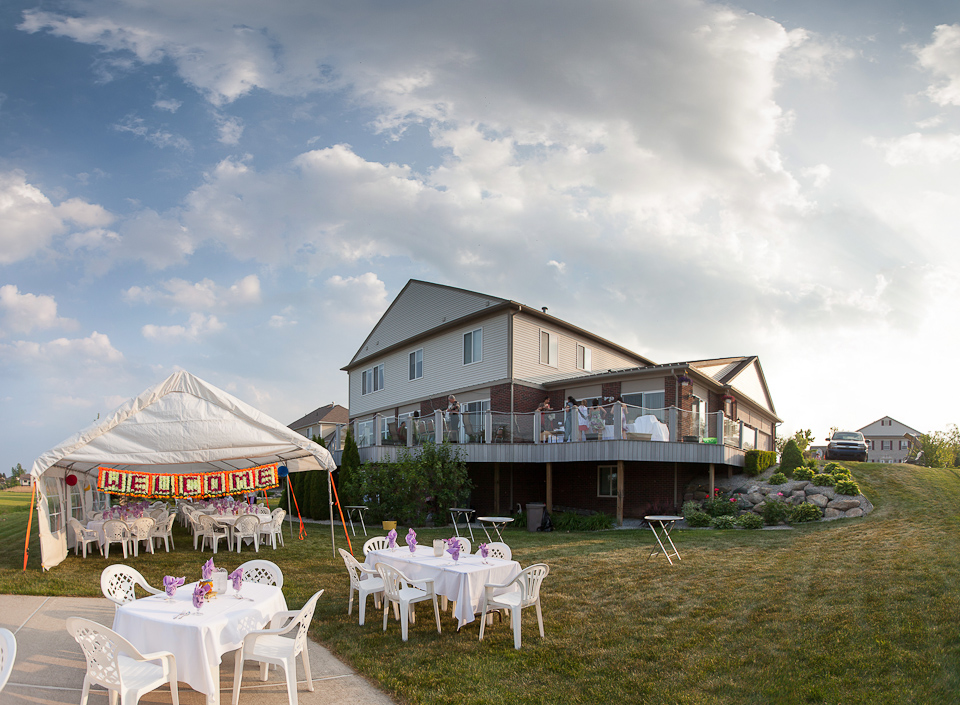 The first event was the Mehndi celebration, I’ll just copy to the text from the wikipedia link:

“The ceremony is mainly held at the bride’s house or at a banquet hall on the eve of the marriage ceremony or few days before the marriage. Generally the bride and groom attend the event together and on the occasion a professional henna artist or a relative applies mehndi to the bride’s hands and feet. The designs are very intricate. Often hidden within the mehndi pattern the name or initials of the groom are applied. The event generally has a celebratory festival feel to it with the women dancing and singing traditional songs and the girls wearing vivid colors…”

We were in Auburn Hills at Amarinder’s Parents’ house (seen above). Several relatives were applying henna to guests whereas Amarinder was sitting over in the corner with her own henna artist. The application on her legs and arms lasted over 3 hours.

Fortunately plenty of people visit the bride to keep her company. Directly below is her mother. 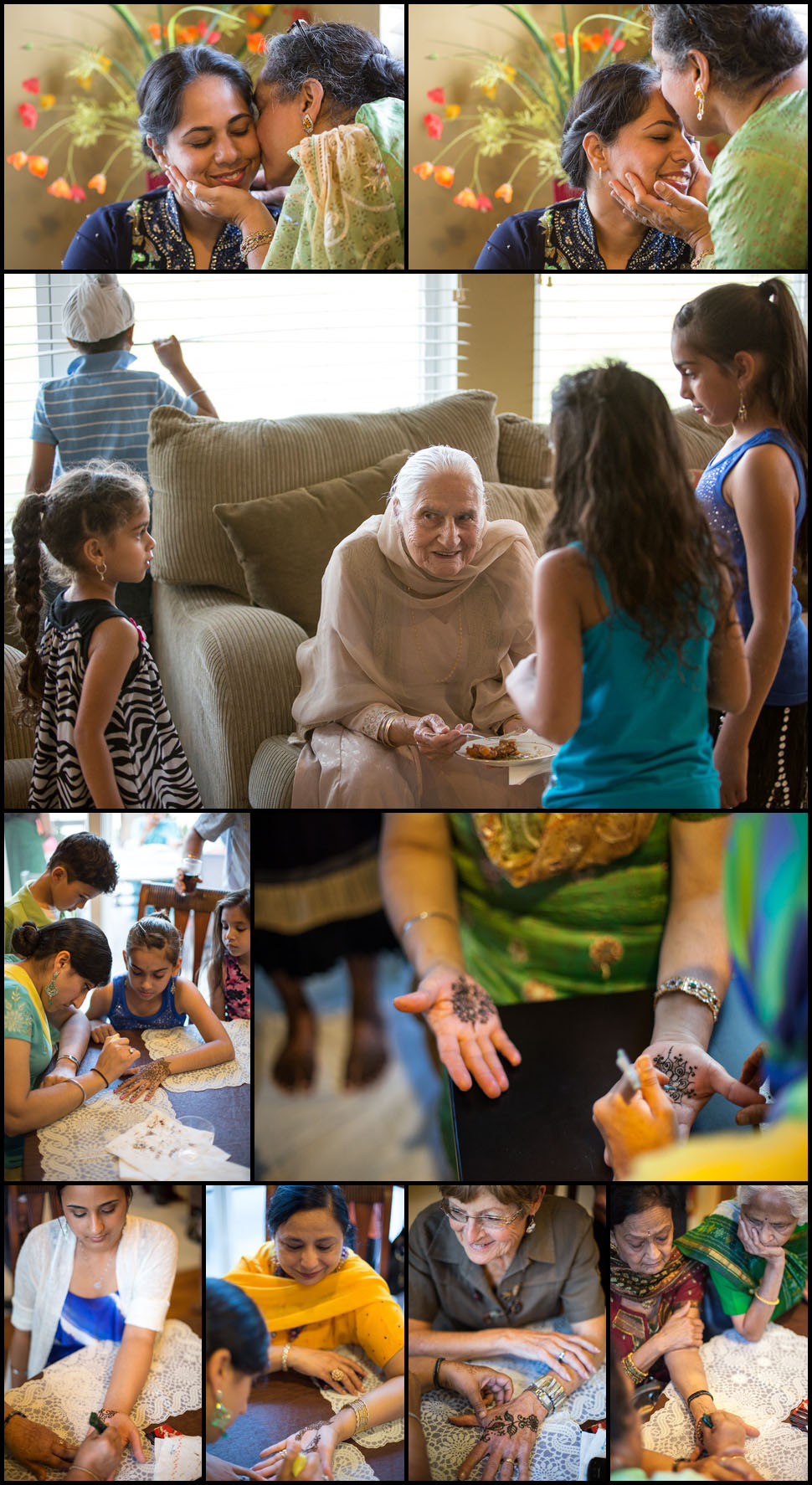 Dinner was served outside. That’s also where the kids played and climbed on things. What’s that? Amarinder’s finally done getting her henna?! 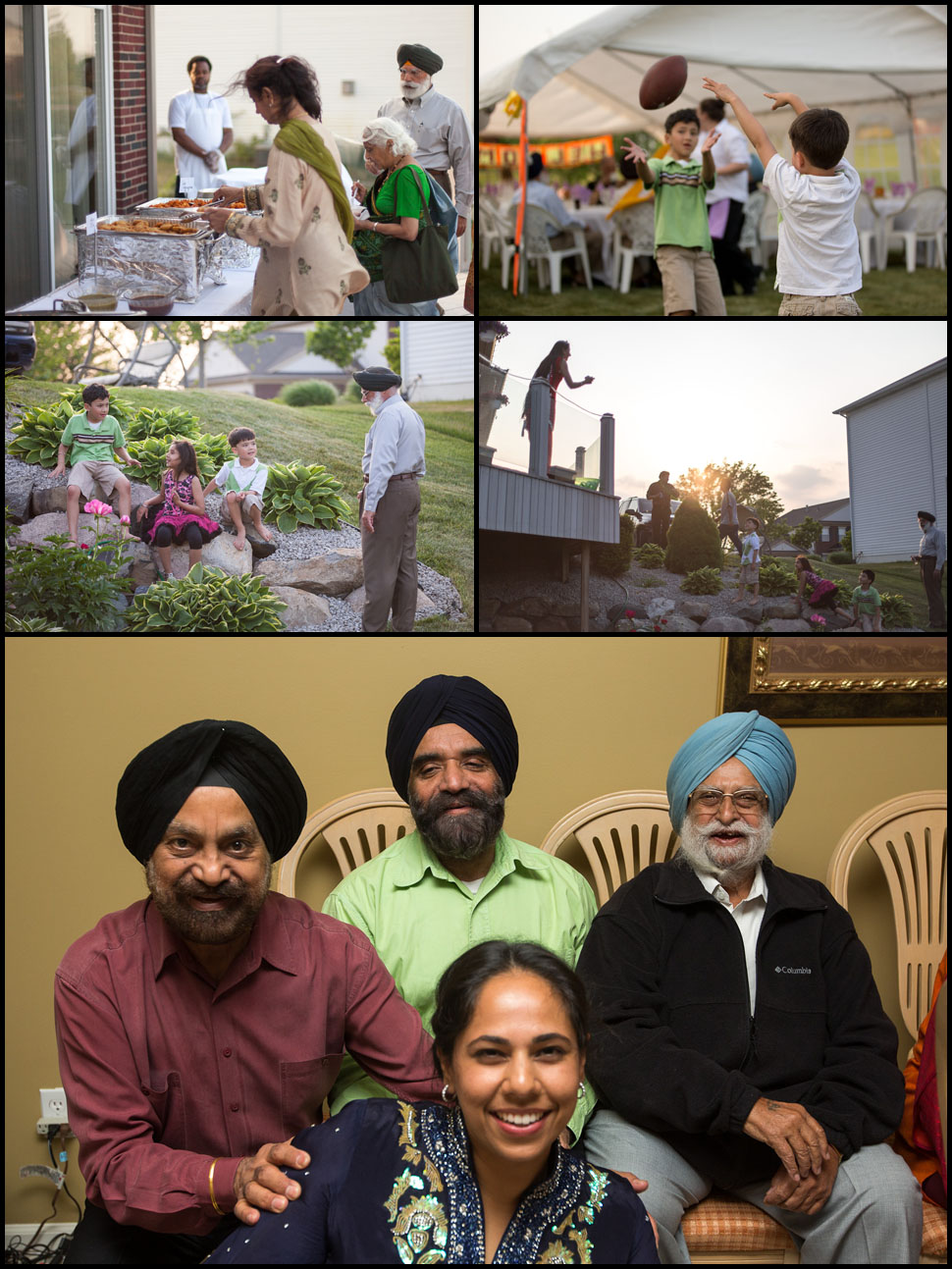 Amarinder couldn’t move her arms while the henna was drying. She slept with it on also so the dye had a long as possible to soak into her skin. Here, Sumeet graciously feeds Amarinder. Below, the music and dancing begin.

Some of the couples’ friends bought they a very nice gift: A brand new DSLR camera! Midway down the next group of photos, the fathers lock legs together.

The next day, the event was a Sangeet Party. Again, here’s a blurb with a distilled amount of information concerning the event:

“The sangeet ceremony… heightens the excitement of wedding festivities. Women relatives and friends play the dholki and sing suhaag, which is a traditional folk song. Songs include ‘jokes’ about the in-laws, and would be husband how to have a successful marriage like and songs about the bride leaving her parents home…” 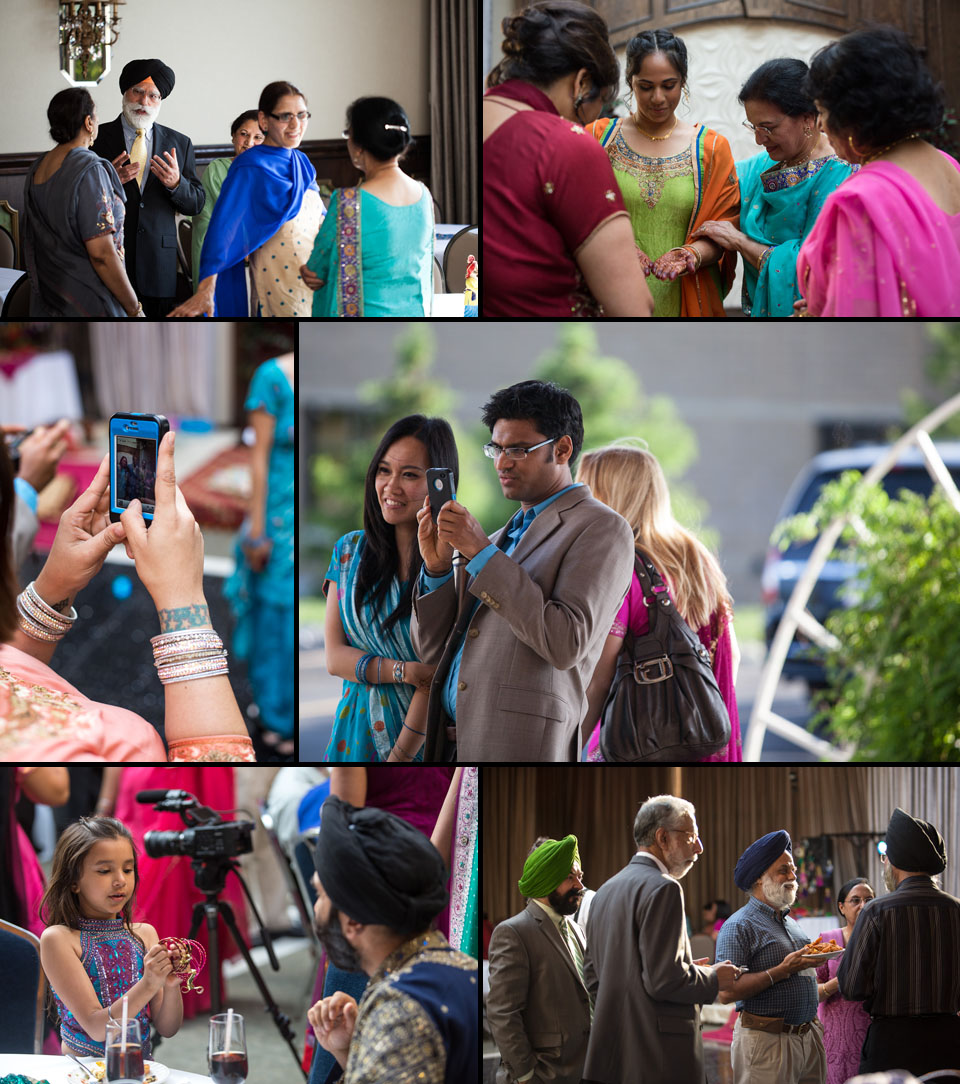 A few performances were given for the couple. Some relatives from California sing and dance. On the left, below, are the two M.C.s.

The brother and sister, below, each put on amazing performances. They both did dance routines. The sister’s was jazz/hiphop and the brother’s was more break Breakdancing+popping. I’d love to check in on them in a few years to see how much better they are.

Below them, two brothers performed a traditional dance.

Here, some quality joking began. Amarinder’s parents and family had to convince Sumeet that he should marry their daughter. They gave him a few gifts he could use on a honeymoon etc. Amarinder’s brother Mohkam brought his A-game and sealed the deal. 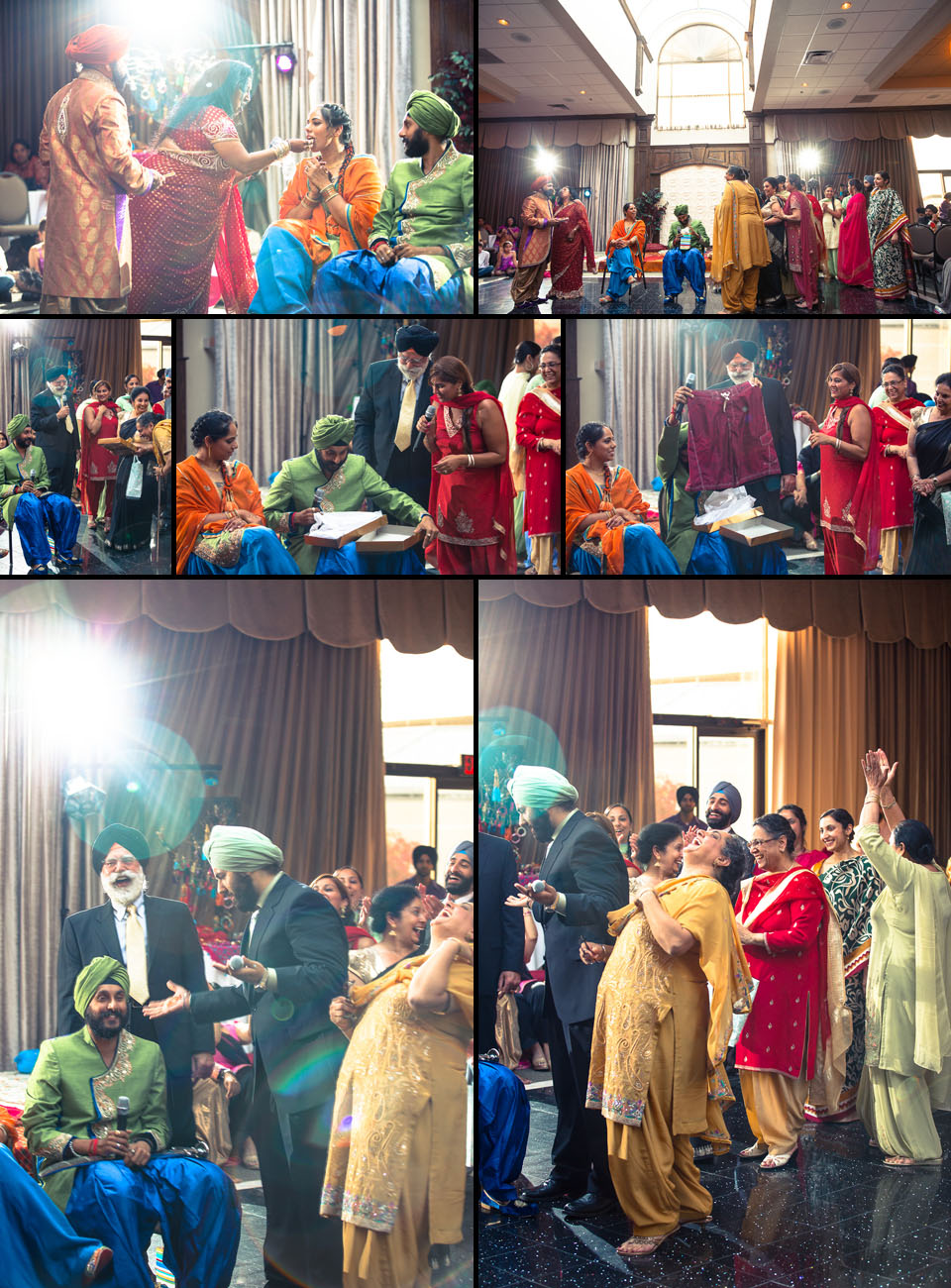 This next group of images shows the Milni ceremony taking place. Typically this is done when the groom arrives at the wedding venue but to save time, they did it the night before. To quote this site: “In the Milni ceremony, the girl’s relatives give Shagun (a token of good luck) to the groom’s close relatives. It is done in the descending order”

Below these first two images, Mohkam leads off strong against Sumeet’s brother and lifts him high into the air. Not to be outdone, Supreeta (Sumeet’s sister) goes for a lift on one of Amarinder’s relatives only to find out SHE’S PREGNANT! (Her face is priceless). Supreeta just saves it for the next of Amarinder’s kin.

After a few more exchanges the dancing gets underway. Yes, a lot of dancing occurred. 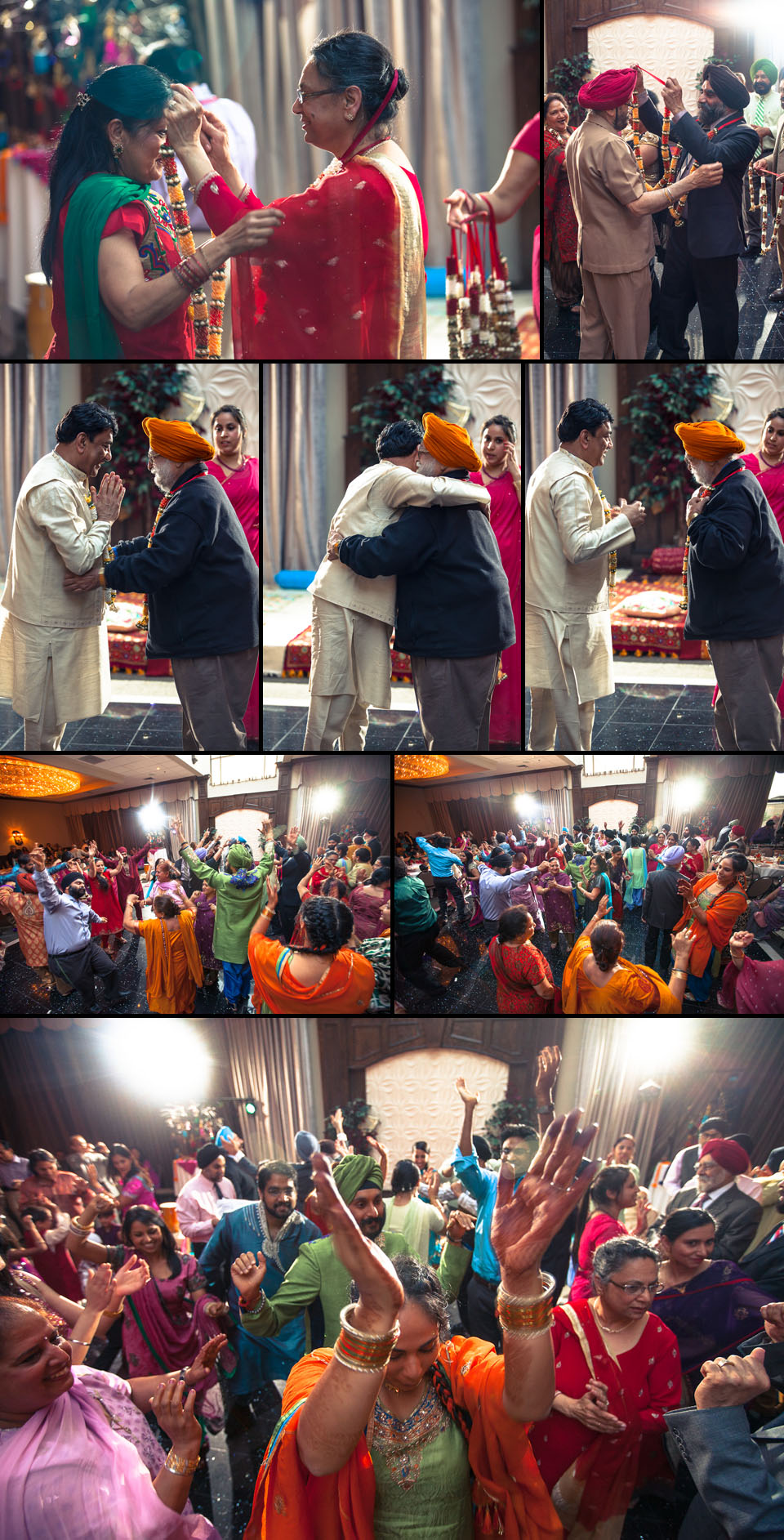 Some wedding songs sung by relatives. 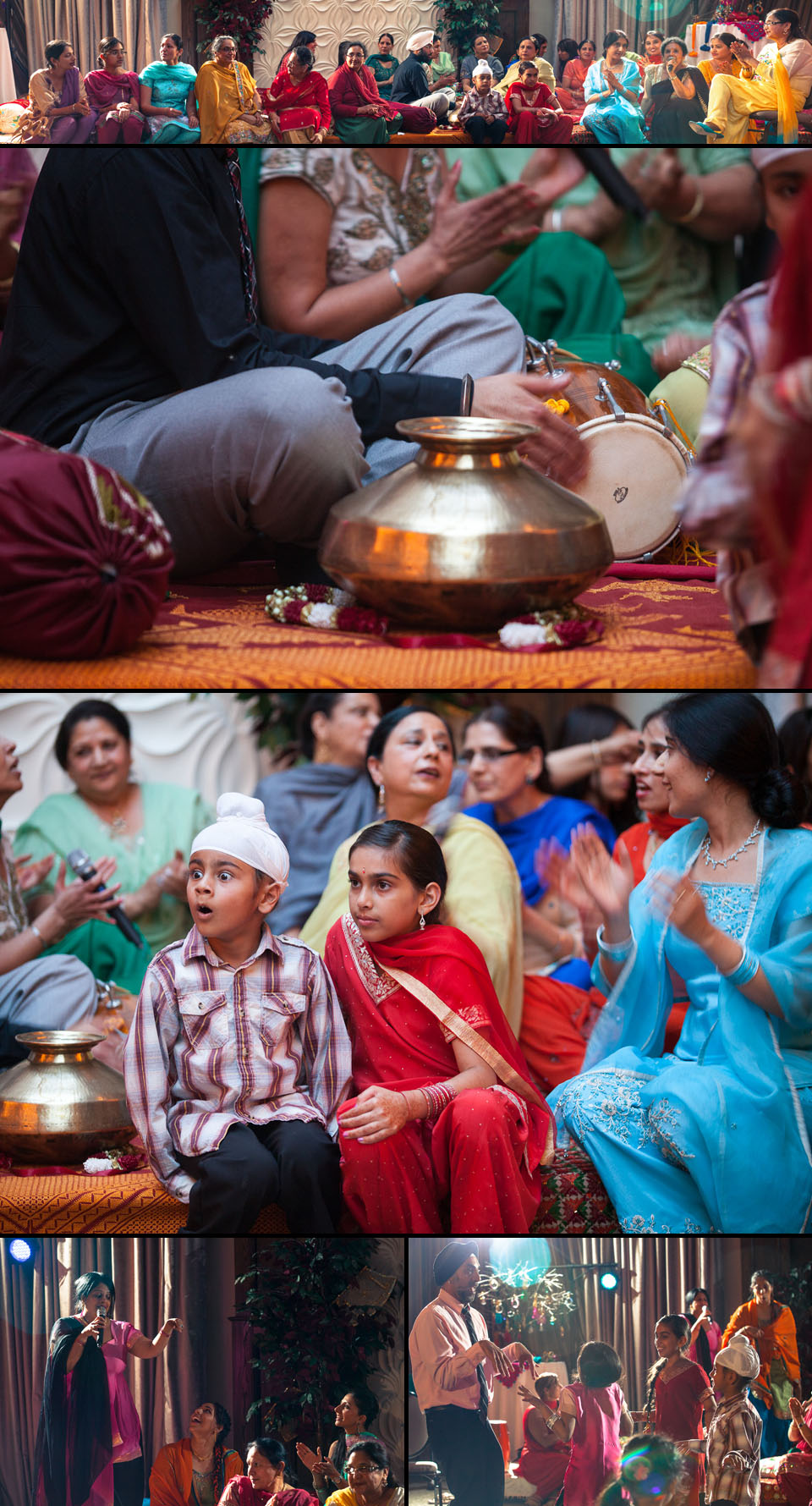 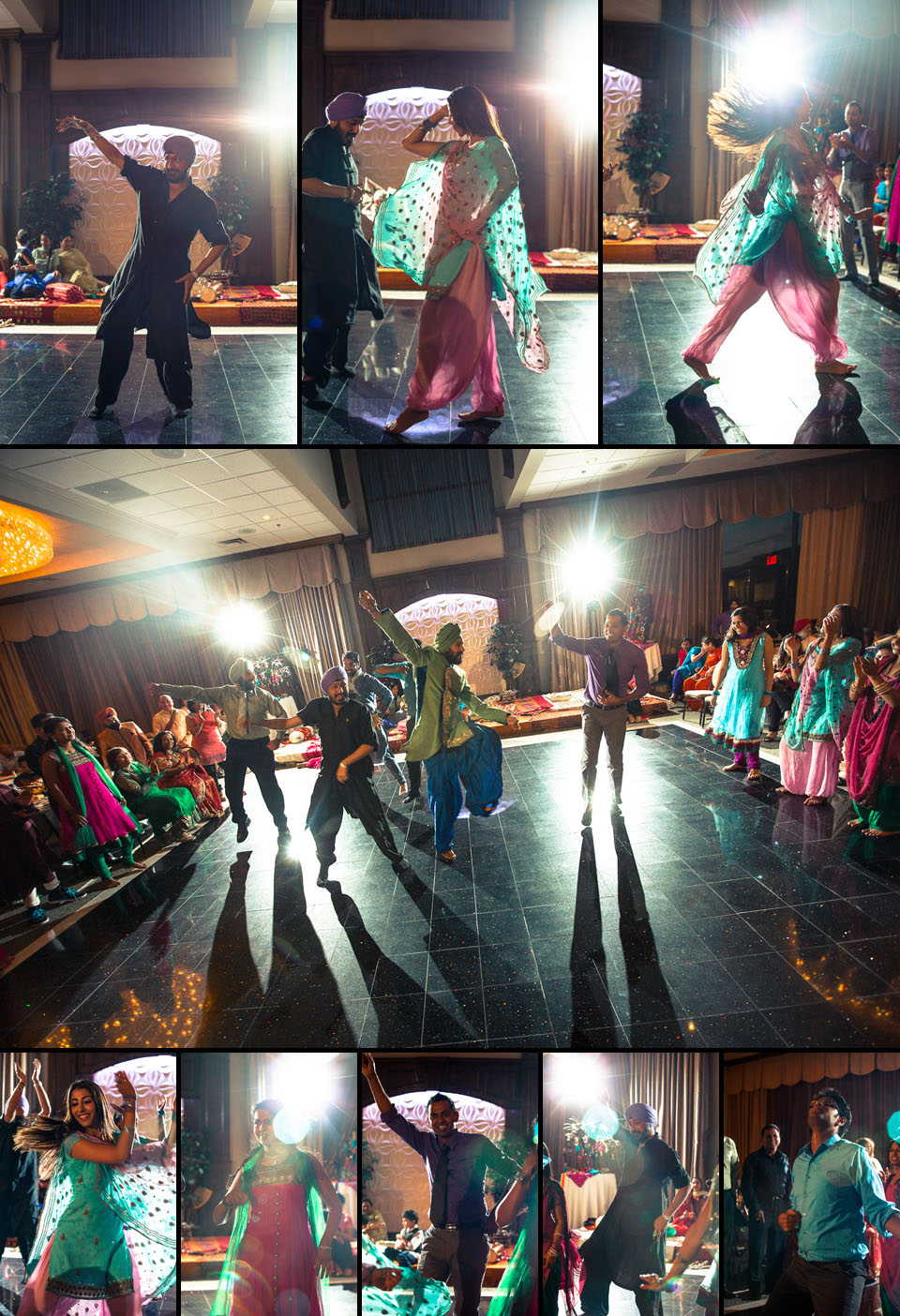 Here, I can’t remember the correct names for things. The men would take turns keeping the beat of the music by using a stick on that reed mat as the woman took turns carrying that vessel on their heads.

The reed mat was a pulp by now but ladies continued to pass around the vessel as the dancing ratcheted up to a new level of energy.

The Wedding day is finally here! (And you’re halfway through the blogpost! Need a break? Do some stretches!) Heidi and I both woke up after a short sleep so that she and I could hang out with Amarinder and Sumeet respectively. Sumeet got ready very quickly so we spent some time hanging out and talking about how great marriage is. Again, the details of his attire are delightful. 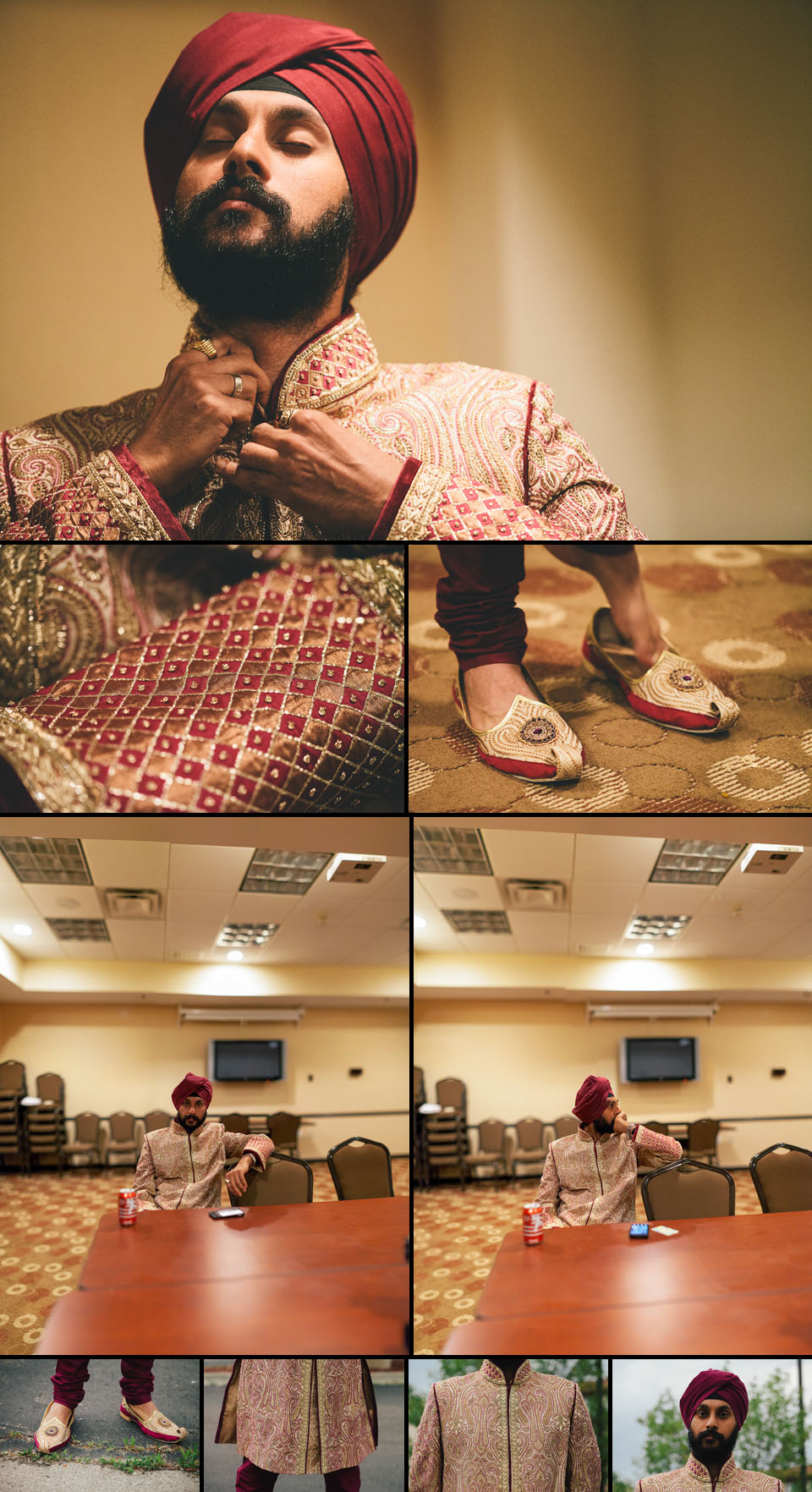 Here are some shots from Heidi who hung out with Amarinder at her parents’ house.

A break was taken in the makeup process to read from The Holy Book. Amarinder also received some ceremonial bracelets (last two images). 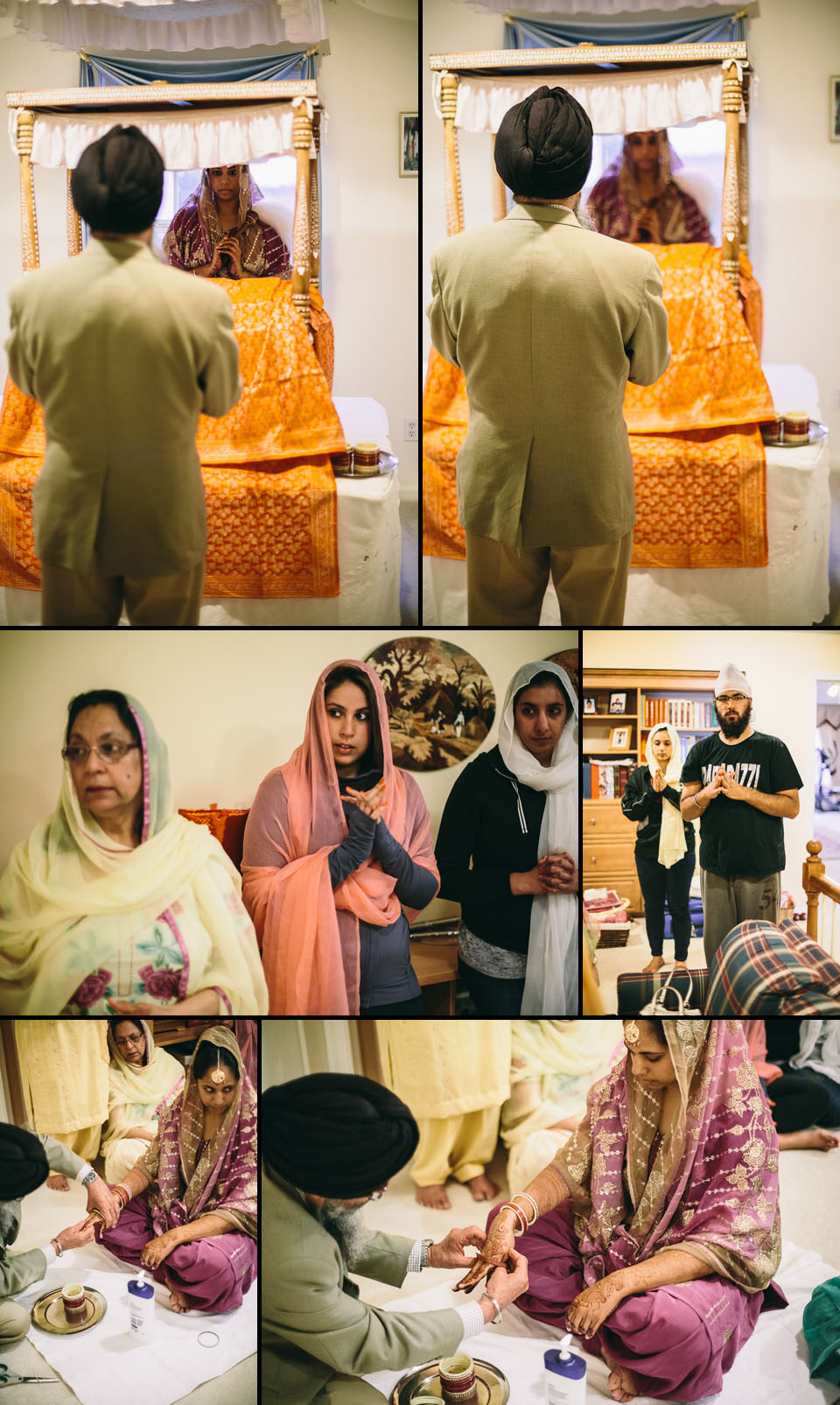 More preparation. Mohkam wraps his Dastar (turban) and Amarinder puts on her shoes… kinda looks like Mohkam is putting them on doesn’t it?

Back with Sumeet, his family says prayers before helping him put on a Sehra. The sword below was a gift from Amarinder’s family.

Sumeet and family depart in order to assemble near the Gurdwara (a Sikh place of worship). 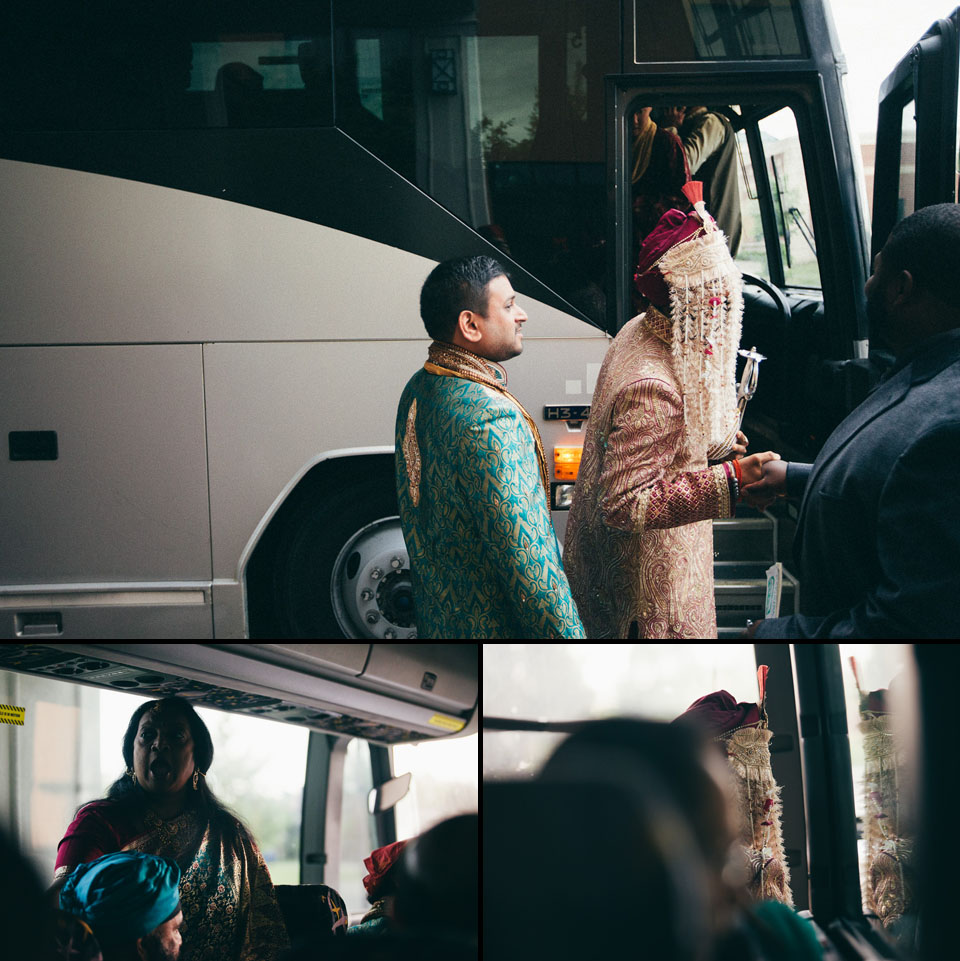 Amarinder goes directly to the Gurdwara and hides away so Sumeet won’t see her until the ceremony.

The Baraat (the groom’s wedding procession) departs from a nearby parking lot and head towards the Gurdwara where it will be received by the bride’s family.

In any Gurdwara, the main feature is the Guru Granth Sahib. Here, the congregation is singing holy hymns.

Sumeet sees Amarinder for the first time. Hymns continue to be sung and the fans are turned on because it gets quite hot. 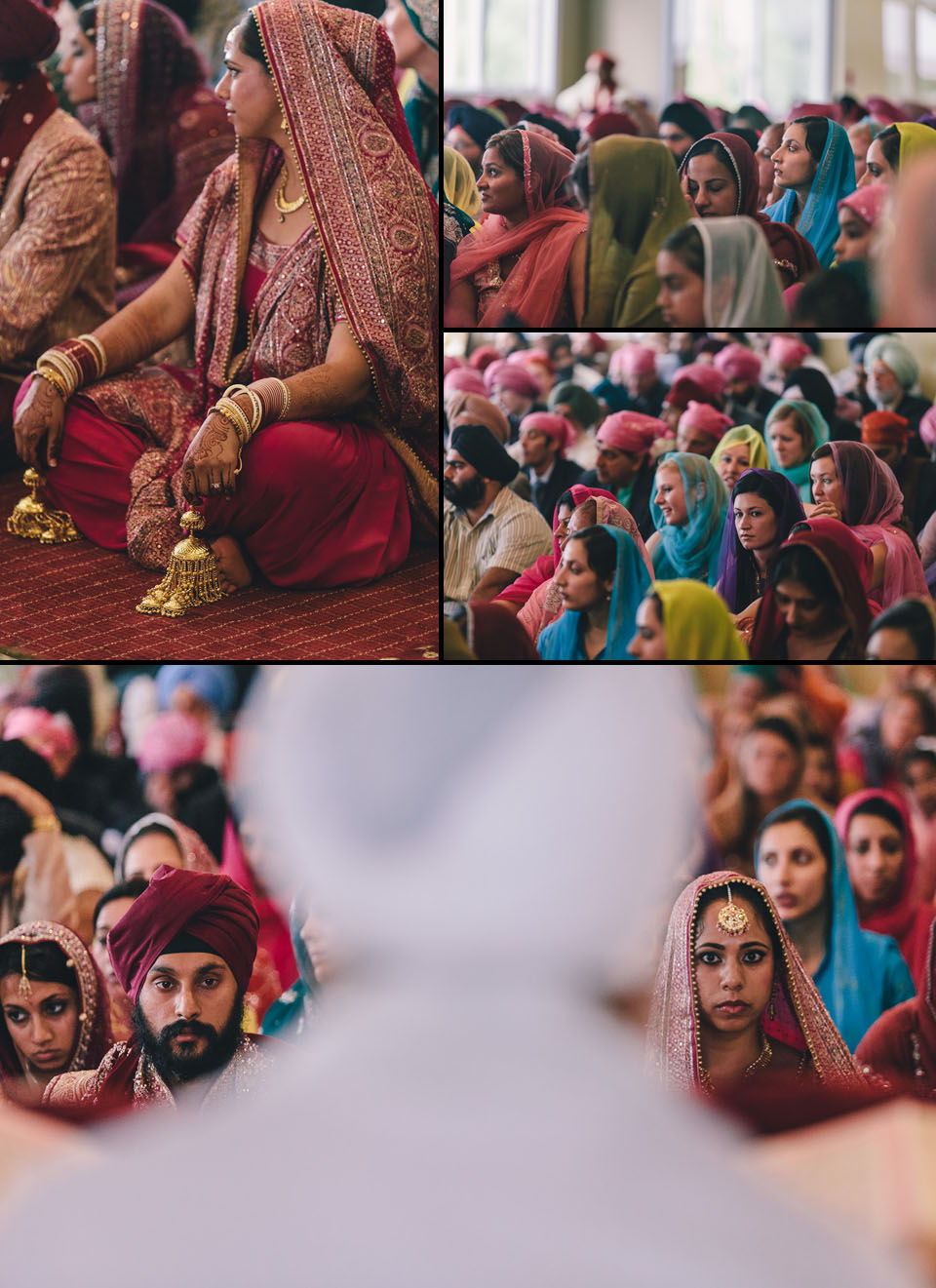 ” The main part of the Anand Karaj (Sikh Marriage Ceremony) is the reading and then the singing of each laav in turn. When the Laav is sung, the couple as a pair, their wrists joined by a piece of cloth, circle The Holy Book.” source

I’ve got three sisters and I love them all. I say this because Mokham clearly loves his sister, Amarinder. His emotion at seeing her tears gave me the sniffles. Below, Sumeet’s brother give him a reassuring squeeze. At the bottom of this image group, blessed “Sweet pudding” is served. That ends the ceremony.

After Amarinder changes into a new set of clothes from Sumeet’s family, we find out that someone has taken Sumeet’s shoes! What follows is a bargaining for his shoes. Finally a price is agreed and the Doli ritual can continue.

Amarinder throws wheat grains over her shoulders. This ritual indicates she is paying off her debt of food to the parental home and wishing prosperity to the family she is leaving behind. Sumeet arranged for a trolley to take the wedding party back to the hotel to change for the reception.

Here are some details from the reception. Cake balls, chocolate covered strawberries, and more! 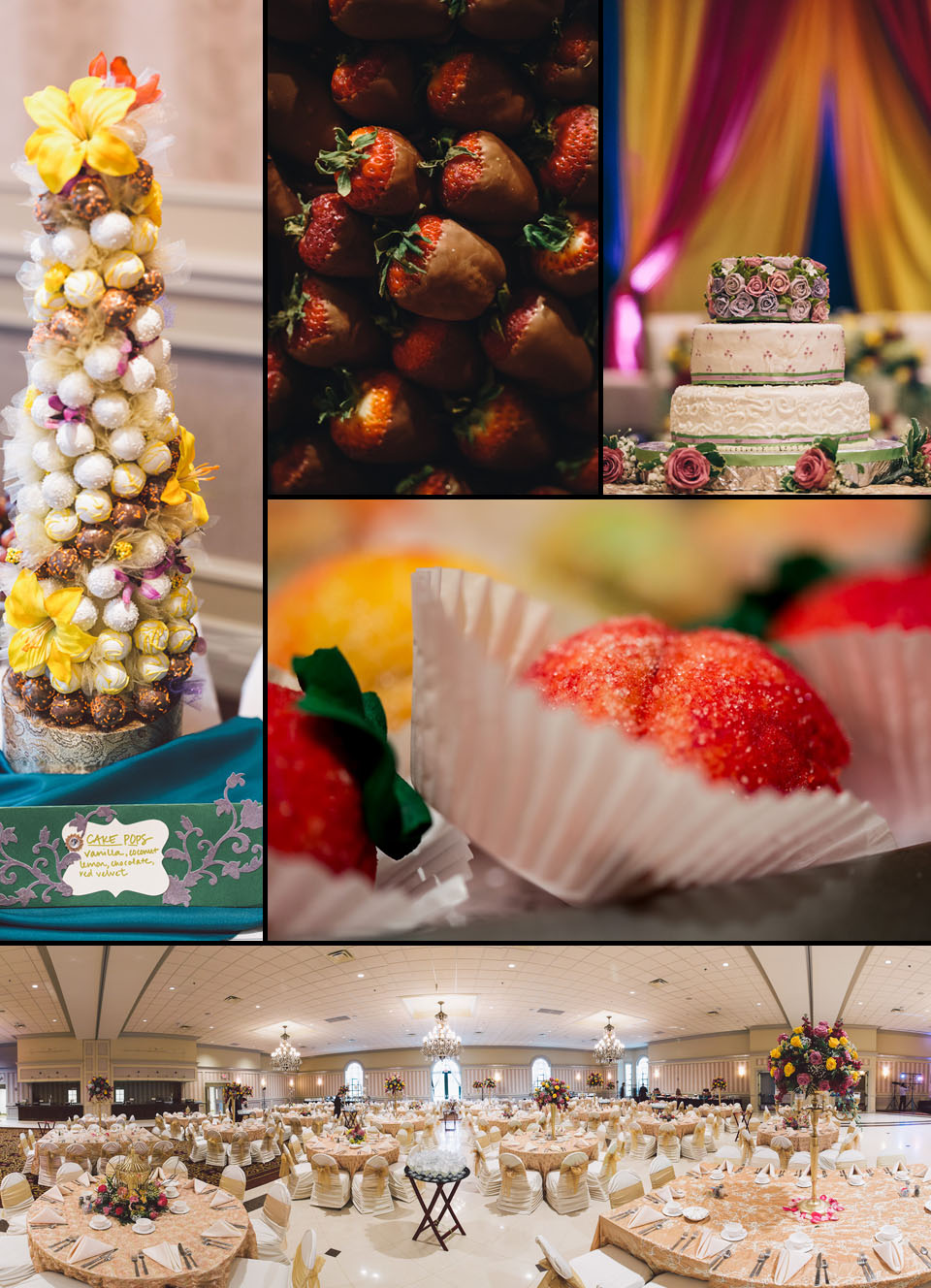 Some of Amarinder’s friends get a crash course in traditional Indian dancing. 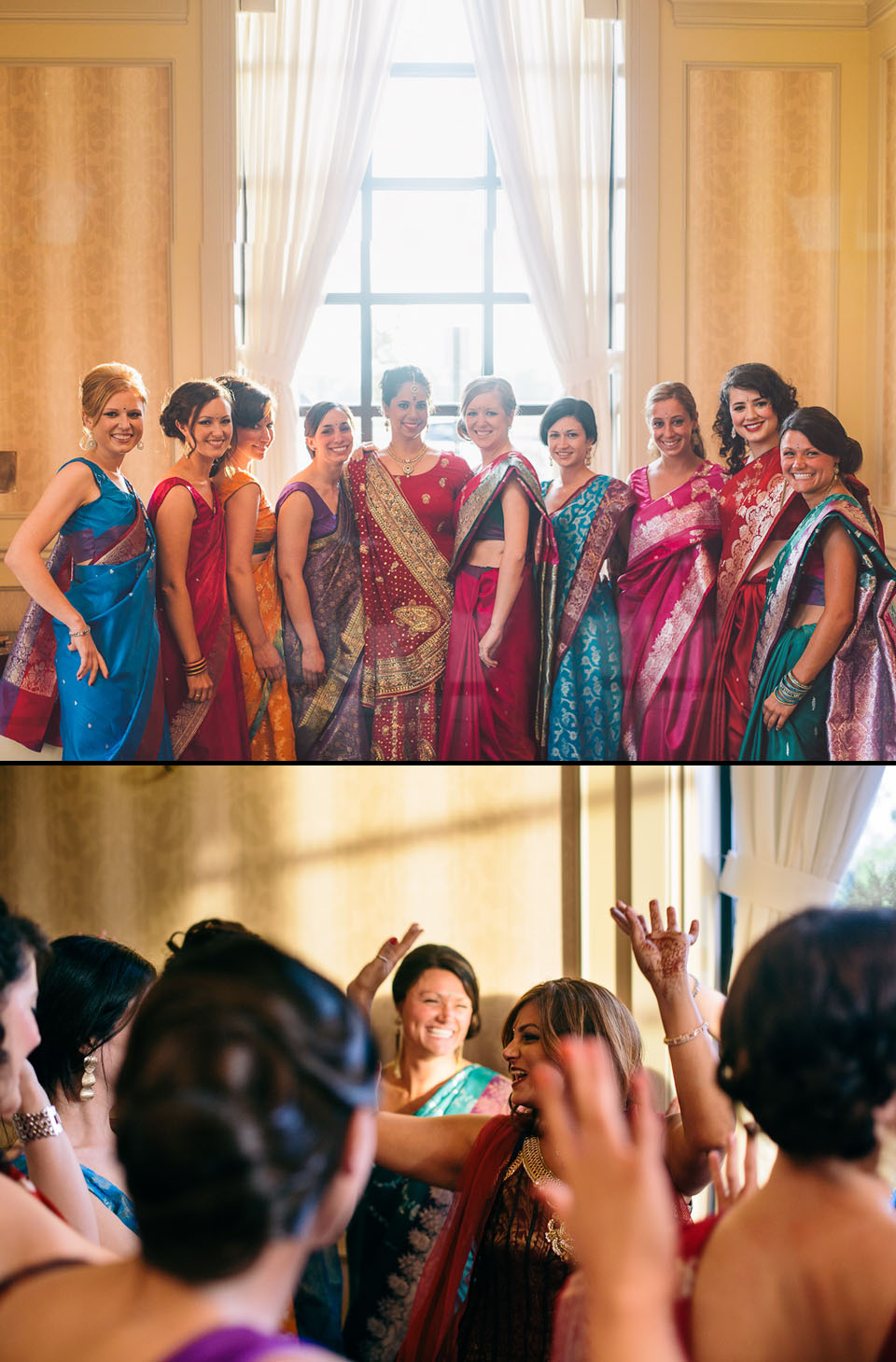 I’m able to steal a few moment with Sumeet and Amarinder before they enter the reception.

And what an entrance!
A little dancing occurs before settling in for some speeches.

Speeches from Amarinder’s close friends, Sumeet’s friends, and both sets of parents. 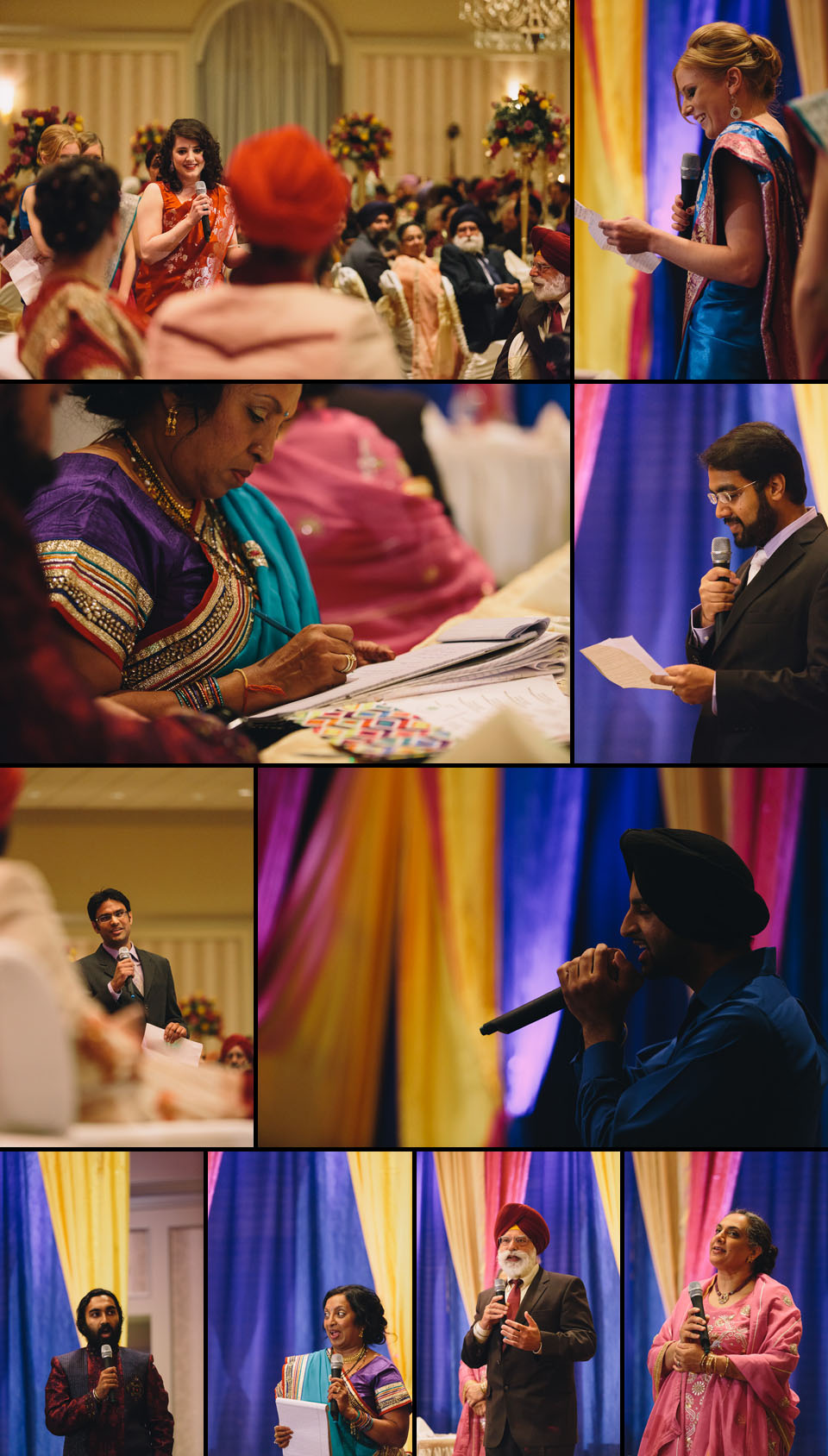 Time to cut the cake! I love those expressions :).
Sumeet and Amarinder have their first dance.
Everyone else dances their feet off.
What a fantastic weekend.

Brian. This is fantastic. I loved learning about the different traditions, and you truly captured the colors and emotions so beautifully ! Excellent work.